This was a costume which was custom created for me by designer Alex Herring, my longtime collaborator. It was a commission from Haus of Suarez, for their vogue ball themed Atlantis. The costume was the first in a trilogy of sea sirens, and inspired in equal parts by the lionfish, and the aristocracy of the Japanese Edo period. 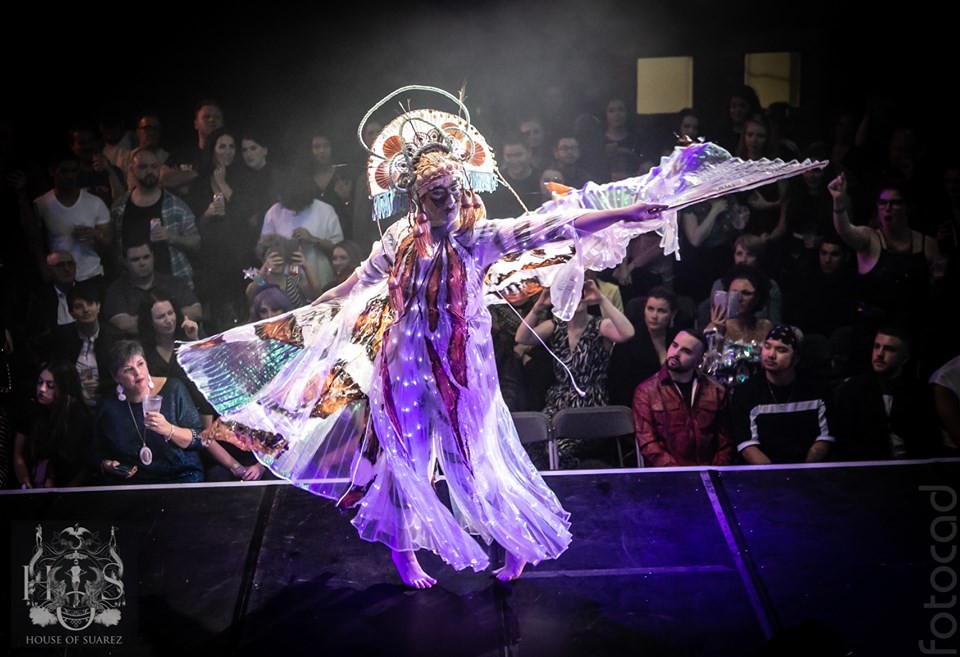 Image description: me performing wearing the lionfish costume at the Invisible Wind Factory. The costume consists of a body-suit with lines hand-painted to resemble the pattern of a lionfish. On top of this, I am wearing a sheer iridescent bodysuit with palazzo pants, and isis wings, all with sound-activated LED lights running through them. On my head is an elaborate circular headpiece shaped like a halo, made of shells and tassels.

I've been working with designer Alex Herring since 2018: we are co-artistic directors of Baubo Theatre, a design-led physical theatre collective. When Alex won a paid commission to create a costume for the Haus of Suarez Vogue Ball, she asked me to model the creation at the event, which took place in Liverpool's Invisible Wind Factory in October 2019, and was attended by over 1500 people. 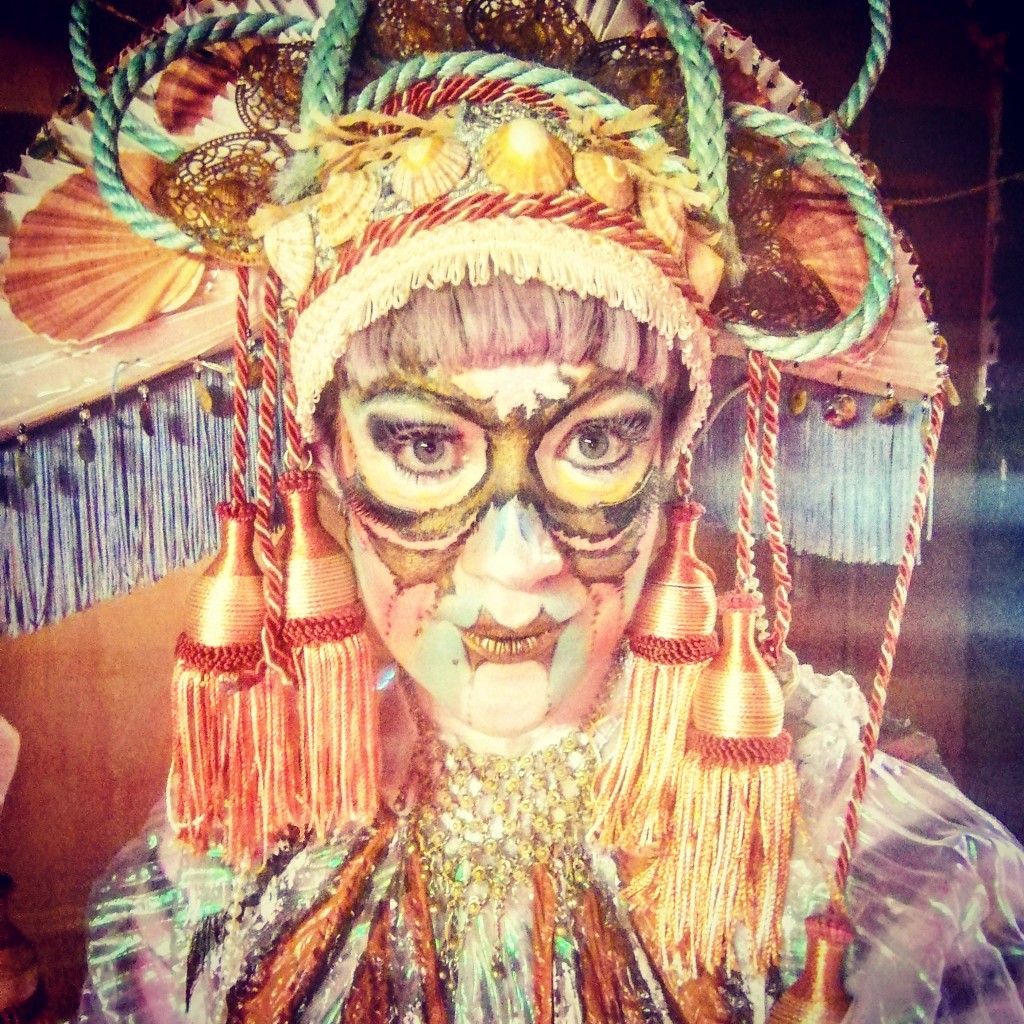 Description: a close-up of the headpiece and make-up. My makeup was designed by makeup artist Laura Jade Sullivan, and like the costume, was inspired by the intricate patterns of the lionfish. My cheekbones are fringed with fake eyelashes. The headpiece has a line of tasselled fringe which stops just about my own fringe (which is blunt and silver), and it is intricately decorated with shells, rope, and tassells and fringe. Many of the materials for this headpiece were found while beachcombing the Mersey beach. Like the rest of the outfit, the headpiece has LED lights strung through it.

The creation of the costume took well over two weeks, and it took me two hours to get ready for the event. Most of this time was spent in makeup, with makeup artist Laura Jade Sullivan. It also took me a day of rehearsing to be comfortable walking and performing with the headpiece, which weighs a couple of kilos.
The costume consisted of iridescent pleated isis wings hanging loosely behind me - outlining the silhouette. Fully opened, the wings reveal the full span of a circular halo and could be manipulated in a burlesque manner to conceal and reveal sensual body parts (seduction without nudity) Fan-like with concertinaed fabric attached to hinged spokes, the wing/fins offer endless movement possibilities - creating the illusion of floating underwater plastic. 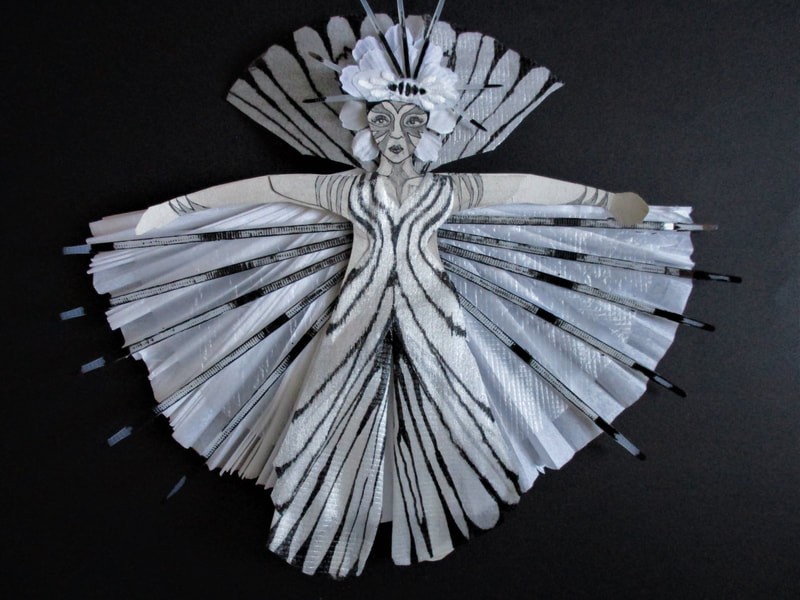 Description: A papercut design of the costume made by Alex Herring, with folded creases for the isis wings, and intricate patterns on the bodysuit.

Alex's description of the costume was as follows:

"The model enters as a sirene, geisha-esque creature, draped in a semi transparent kimono, peaks of the pleated origami style palazzo jumpsuit are visible - along with faint stripes and markings. A celebration of fans, pleats and origami, inspired by the decadent aristocracy of the Japanese Edo period. Influenced by traditional Japanese Kabuki Theatre, facepaint will be applied heavily to create a brightly painted mask and also feature a dramatic fanned headdress replicating lionfish fins.

Iridescent pleated isis wings are attached to the performers shoulders, hanging loosely behind the model - outlining the angular silhouette. Fully opened, the wings reveal the full span of a circular halo and can be manipulated in a burlesque manner to conceal and reveal sensual body parts (seduction without nudity) Fan-like with concertinaed fabric attached to hinged spokes, the wing/fins will offer endless movement possibilities - creating the illusion of floating underwater plastic.

The wrap-around kimono is easily unfastened and dramatically discarded to reveal a barely-there, see-through jumpsuit that enhances and beautifies the models natural curves. The lionfish’s distinctive markings will be painted onto an all over body suit with EL wire overlayed on the patterns - to emphasise the graphic lines once illuminated. A small hidden pouch containing the batteries/electronics will be concealed by the pleated wings, at the base of the spine.
​
The materials will be a combination of found beach fabrics and translucent layered plastics, adhesive tape and manipulated paper, emphasizing the ghostly translucent palette - later transformed with colour changing EL wire."

If you are under the age of 18, if such material offends you or if it is illegal to view such material in your community please EXIT now. Otherwise, hit ENTER and happy twirling!

EXIT
ENTER
We use cookies to remember your login details between sessions. Tap 'accept' if you are okay with this.
Accept